Your First Job Doesn’t Need to Be Your Dream Job: Embracing Stepping Stones 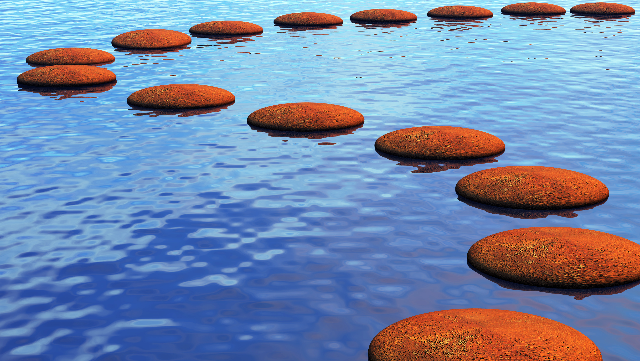 Whether you are finishing school or switching careers, you might be feeling pressure to know exactly what you want to do and how to get there as quickly as possible. Although it’s good to set goals and to work toward having a job you love (most of the time!), it’s okay, and even desirable, to look at the path toward your ultimate job as a series of stepping stones.

What Are Stepping Stone Jobs and Why Should You Not Shun Them?

A stepping stone job can be viewed as a short- or medium-term learning experience that allows you to move toward the job you want. That’s not to say it’s equivalent to being in school or volunteering. It’s a job. It will come with a salary and maybe, if you’re lucky, health benefits. The goals of these interim positions are to make enough money to pay the bills, to learn about yourself and the world of work, and to gain skills and experience that will help you get your next job. Recognize that you probably won’t get your dream job right away—and that’s okay. There is much to be gained from the jobs you do get that lead you toward your goal. Many highly successful people got to the place they are now by starting out in entry-level jobs. What you take from these stepping stone jobs matters much more than the job itself.

The World of Work Is Changing All the Time

We can’t know if jobs that are highly desirable now will still exist in five to ten years. And we can’t know about all the jobs that will exist in five to ten years, jobs that we haven’t yet imagined. Unlike the past, when people often spent their adult lives at one company, organization, or institution, in today’s fast-changing global economy, people’s career trajectories will likely take many turns over the course of their work lives. Instead of simply striving to move up the ladder in a single field or at one company, most people will move vertically, laterally, and even circuitously, as the economy, the job market, and their interests and needs change. According to a 2019 Bureau of Labor Statistics survey, the average number of jobs people will hold in a lifetime is twelve. Adjust your expectations accordingly and you’ll feel a lot less pressure.

Your First Job May Not Be Your Dream Job

According to Jennifer Jones, an assistant professor of nonprofit management and leadership at the University of Florida, “The best thing to do [when entering the job market] is look for a job that will build your skillset. If you want to [make a difference] it’s not going to happen when you’re 23, 24. It’s going to happen when you’re ten years out of college.” Building skills and contacts, possibly over the course of several years, might sound like a bore, but remember that you are not locked into your first job for life. “A job is the paycheck,” as the Saint Leo University associate chair for Human Services Nancy Wood says. “A career is something you’re going to do for the rest of your life. A lot of people end up with jobs and say, ‘Well this isn’t what I want to do.’” Remember, you are working toward what you “want to do.” You have to learn to walk before you can run!

The writer and journalist Kat Boogaard was disappointed at the first job she landed after journalism school: “Imagine my surprise when the first gig I managed to score out of college was as a receptionist. No, it wasn’t exactly the first step I thought I’d take.” But when she thought about it later, she says, “I realized something important: That job was a pretty great stepping stone in my career—I learned way more than I ever thought I would.” First jobs can teach you a lot of different skills, precisely because you will probably wear many hats and be expected to support a diverse group of people who work there. Some of those valuable skills that will put you on the path to reach your goals include:

And, although it’s not a skill per se, you are building a résumé with work experience that will make you stand out from those who go right for the gold ring, fresh out of school or from an unrelated field. Stepping stone jobs demonstrate your willingness to put in the work.

As Jaime Cleland, an acquisitions editor at the MLA, said in a recent Job List blog post about her varied experiences that led to her current career, “[A] teacher once told me that ‘nothing you learn is wasted.’” And as Anne Donlon, a technical project manager in the information systems department at the MLA, added, “I’ve been surprised by the way elements of previous experience in roles, skills, and fields become relevant to subsequent positions. I wouldn’t have been able to predict which aspects of these experiences would lead to the next one.” So step away from the pressure of getting your dream job right out of the box, and embrace the stepping stones that will get you there in the long run.